Looks like the Government of Japan is going to ramp up support for sake as an export product!

Govt support for sake exports to get more punch
by the-japan-news.com via The Yomiuri Shimbun
November 5, 2019

SAKAIMINATO, Tottori — The government will strengthen its support for the expansion of sake exports, Chief Cabinet Secretary Yoshihide Suga said Monday during his visit to a sake brewery in Sakaiminato, Tottori Prefecture, that is committed to exporting its products.

Specifically, Suga said the government would support development of new products targeting overseas consumers; invite foreign buyers to Japan; and make use of the Geographical Indication system that regulates the intellectual property rights of agricultural products.

New York has its first sake brewery and it is fantastic. The Taproom at Brooklyn Kura opens today and serves the freshest sake you can get this side of the Pacific: Just pressed sake on draft, lightly filtered Orizake as well as raw sake mash from the Tank. All of it delicious.

Born in Japan, and Now Made in Brooklyn: Sake
by Rachel Wharton, New York Times
March 2, 2018

At first glance, Brandon Doughan certainly fits the mold of the professional brewer in Brooklyn: The Portland, Ore., transplant has a tidy beard, a penchant for plaid button-downs, and is a former home-brewer well-versed in advanced fermentation.

Nice article from a major media outlet about the growth of sake in the export market.

As Japan falls out of love with sake, brewers look to the West
by DANIEL HURST, NBCnews.com
February 21, 2018

KYOTO, Japan — Sake runs in Tokubee Masuda’s blood. He’s the 14th generation of his family to operate one of the many sake breweries in Fushimi, a small district in Japan’s old capital of Kyoto.

Masuda’s passion shines through as he escorts visitors around the Tsukino Katsura facility, explaining how high-quality rice and fresh groundwater is used to produce the traditional Japanese drink, sometimes described in simple terms as rice wine.

Sake seems to be hitting its stride. Sake Exports increased 19% in 2017 and has tripled in volume over the last 16 years. Awesome news that speaks to the growing interest in and knowledge about sake with consumers outside of Japan!

Japan’s sake exports increased 19 percent in 2017 from the previous year to 23,481 kiloliters, setting a record high for eight years in a row.

Partly boosted by a growing interest in Japanese cuisine overseas, sake exports have enjoyed an upward trend since 2006, when exports topped 10,000 kiloliters. Last year, the volume passed the 20,000-kiloliter mark for the first time, and the rate of increase was also the highest ever.

Is Sake too cheap in Japan? I often hear that prices for premium sake in the USA are too high. But I always enjoy the very low premium sake prices whenever I visit Japan. This article raises many interesting questions!

Is Japanese sake too cheap? Many in the industry think so
by HISAO KODACHI, Nikkei Asian Review
February 14, 2018

TOKYO — Japanese sake is gaining enthusiastic fans around the world. Yet foreigners who are familiar with sake after drinking it at places like upscale restaurants are often surprised at how cheap it is in Japan.

“Sake tastes good but it is priced too low,” said Shinya Tasaki, president of the Japan Sommelier Association. Tasaki has a sake refrigerator at home and introduces sake to sommeliers from around the world.

OOOOH, I love stories like this! Local Colorado sake brewers are working to change their state laws for our industry. Good luck guys!

Colorado seems like the perfect place to make alcoholic beverages; just look at the proliferation of breweries and distilleries around the state, and the growing number of wine and cider makers. So what if your drink of choice is sake? That shouldn’t make too much of a difference when it comes to producing and selling something that’s not so different from beer and wine, right?

I’m quoted in this article about the sake industry’s move to expand its market overseas. The Export market for Japanese brewers is an area of growth and I think they will continue to put lots of effort into growing demand for sake outside Japan.

Outside of Japan, sake is somewhat of a mystery, with its own terminology, styles and drinking traditions. But the country’s recent push to make sake more comprehensible to non-native drinkers is making an impact, especially in the U.S.

Sake can easily fall between the cracks for American drinkers. Because sake is brewed, relying on a mold called koji to convert the rice’s starches into sugars for fermentation, “it’s made like a beer but drinks like a wine” in texture, character and strength. A pint of 5 percent alcohol beer makes a sensible serving; a pint of 16-to-17 percent alcohol sake is a whole night of drinking.

With a view to boosting the overseas market for Japanese traditional sake and shochu, the government will soon designate them as “national alcoholic beverages,” according to Motohisa Furukawa, state minister for national policy.

The planned designation is aimed at encouraging the revitalization of local economies concerned and expanding demand for rice, Furukawa said Saturday.

Rice is the raw material used for making sake, a fermented beverage, as well as shochu, a distilled spirit. Shochu also can be produced using other crops, such as sweet potatoes and barley.

Our friends Rick and Hiroko, owners of NYC’s only all-sake store Sakaya, were recently interviewed by Eat Out NY’s exuberant host Kelly Choi. Rick and Hiroko are media pros at this point having scored spots on Tokyo TV, NY1, and now this!

I happened to be in the shop myself when Kelly Choi wandered into Sakaya about a year ago saying she should come back to do an interview. And now all these months later – it’s in the can! Check it out!

Sake is always the number one story with me, but other media outlets have been featuring a lot of news on Nihon-shu, too. Here is a quick roundup of some interesting sake stories making the news recently:

Miho Fujita, president of the Mioya Brewery Co. in Ishikawa, Japan was recently interviewed by the Village Voice. And in their words she is “freaking adorable” I couldn’t agree more! Read on:

For Heaven’s Sake–Japanese Rice Wine Is No Longer Just A Boys’ Game
By Chantal Martineau / The Village Voice
Wednesday, May. 20 2009

She may be in charge, but Miho gets her hands dirty in the brewery everyday, working closely with her brewmaster, and even tending to the rice. As one of only a handful of women in the industry, she has become something of a media darling in her native Japan. (It doesn’t hurt that she’s freaking adorable.) …

There has been a lot of talk about recent sake ingredients scandals in Japan. This AP article focuses on the recent hubbub at Bishonen Brewery.

ANALYSIS: Japan in need of sake brewery law that tells it like it is
by The Associated Press
May 29, 2009

MIYAZAKI, Japan, May 29 (Kyodo) â€” The image of Japan’s iconic drink has taken a knock following revelations of a scam operated by one of the country’s major sake breweries.

Brewery Bishonen Shuzoh Co. of Jonan, Kumamoto Prefecture, is said to have sent out high-grade rice for polishing and received back lower-grade rice that it used to make sake. It is further alleged that it received cash to make up the difference in rice quality. Bishonen President Naoaki Ogata said he could not resist the temptation to make off-the-books money because his company was in dire straits. He added that the practice existed even before he joined Bishonen in 1982. …

One of my favorite brews is getting some airtime over at Time Out New York! Our friend Tejal Rao profiles Kikusui Funaguchi honjozo nama in a can. One of the most popular sakes in the new “one cup” sake movement. Thanks Tejal!

Yes, we can! The Japanese famously stock their goody dispensers with cheap thrills: instant noodles, beer, lightly worn underwearâ€¦ Itâ€™s not hard to see why sake in a can, also sold on street corners and in train stations, is generally considered a sake of ill repute. But high-end Funaguchi Kikusui Ichiban Shibori is no ordinary quaff. The unpasteurized gem is fresh, sophisticated and full of body and lingering floral notes. The chilled sake started out as a special treat reserved for visitors to the Niigata prefecture brewery, but once the trend of namazake (unpasteurized sakes) took off, the company figured out how to properly store and transport the precious liquid. … 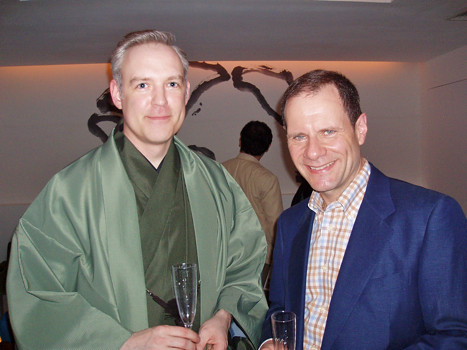 Imagine my surprise when Food and Drink writer Michael Anstendig alerted me to the fact that my kimono-clad picture was featured on the Time Out NY website!

I recently attended a fantastic sake event and I will post a full report soon. Until then, check out this Blog Post in the Time Out NY Food Blog.

This event was an absolute blast and I had a lot of fun dressing in Kimono and drinking some of the most rare sakes I might ever enjoy. Not a bad way to spend and evening in the Big Apple. I think any trip to Japan and back would be exciting, but traveling back and forth every day?

Well, believe it or not, I’ve been getting the opportunity to jet back and forth to Japan, but I’m forced to ride in the “seat pocket in front of you…” That’s right, my Elements of Sake Class is featured in February’s issue of Japan Airlines “Skyward“ in-flight Magazine!

It’s a full page spread, but only in Japanese, so if anyone can help with a translation, let me know! Click on the image to the left or click here to view the PDF.

Sake is always the number one story with me, but other media outlets have been featuring a lot of news on Nihon-shu, too. Here is a quick roundup of some interesting sake stories making the news:

Philip Harper, Japan’s only foreign Toji and author of The Insider’s Guide to Sake, is featured in this wonderful article in the LA Times:

An unlikely master brewer is hoping to revive the centuries-old drink’s flagging popularity — an auburn haired Briton, Philip Harper, who fell in love with the drink and the culture that produced it.

Reporting from Kumihama, Japan — As master brewers have done for 13 centuries before him, the sake factory boss is everywhere at once in his rustic timbered building along Japan’s rugged northern coastline: helping to drag sacks of rice, gently issuing instructions to his four brewing assistants, consulting with his own boss, a fifth-generation owner.

Our friend and Foodie about town Michael Anstendig recently published a great list of the “Top 10 Sake Dens” that was featured in the New York Observer. Makes me proud to be a New Yorker!

Revered as Japanâ€™s â€œDrink of the Gods,â€ sake is the traditional offering to Shinto deities. With good reasonâ€”itâ€™s pretty miraculous stuff. Employing rice, yeast and water, some of the humblest ingredients on Earth, sake brewers can tease out a staggering array of divine aromas and flavors, from the earthy to the fruity. New Yorkers have lately become hip to sake, having figured out the good stuff isnâ€™t flogged at scalding temperatures in cheesy ceramic bottles. Sake-drenched drinkeries have happily proliferated to meet this new thirst, offering mind-bending varieties, tasty eats, and diverse vibes.

I found this interesting article on the Ozkei production in Hollister California. Little did I know that Ozkei is celebrating 30 years of making sake in the US. Since 1979! The comments on why This particular part of California are especially interesting.

Hollister’s Ozeki celebrates its run as America’s first sake brewery. Yoji Ogawa leans over a large, cloth-lined tub and thrusts his hand into the snowy white mass filling it. Bits of white dust stick to his cuticles as he draws his hand up and opens his palm, revealing a handful of what look like powdered, bloated bits of Styrofoam.